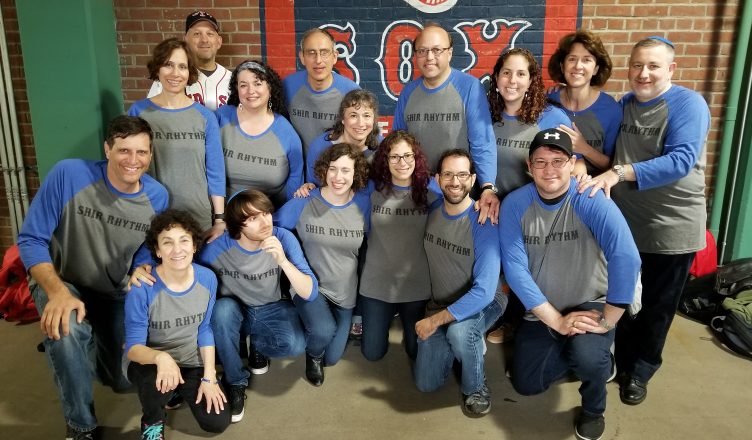 SHARON – For a few moments this month, the attention of 35,000 fans at Fenway Park was focused on a Sharon-based singing group.

Shir Rhythm, an a cappella group based out of Sharon’s Temple Israel, came to the historic park on June 5 to sing the national anthem as part of Jewish Heritage Night.

Group President Heidi Kassner, of Easton, said she and Lisa Einstein started Shir Rhythm about three years ago. It was a way to continue performing as adults, she said – something that’s difficult to find, as most groups are student-focused.

“We brought together 15 people who didn’t know each other, but became really good friends,” she said. “We love performing and singing together.”

“It’s a great group, made up of all volunteers,” said Getz, who shares music director duties with Sharon resident Ilan Grossmann. “Even if we all have different styles and levels of experience, we are able to come together to produce a beautiful sound.”

Kassner said she had reached out to the Red Sox about the opportunity to sing during Jewish Heritage Night. They sent in an audition tape and, in her words, bugged their contact until they got an answer.

Getz said the group had been practicing the anthem since it had learned of its selection months ago.

“We’ve been trying to perfect it,” she said, noting that they had sung Deke Sharon’s arrangement of the song. “It is such a beautiful arrangement.”

The day began with a sound check – allowing group members the chance to acclimate themselves to the echo that such a large space creates.

Kassner said Boston Pops conductor Keith Lockhart had thrown out the opening pitch for the game, so getting the chance to perform in front of him made the day even more special.

Getz said singing at the park was quite a thrilling experience.

“My daughters were there; it made me so happy to hear them say, ‘That’s my mother!’” she said.

A number of temple members were in attendance at the game, Getz said, and hearing them say “kol hakavod” – Hebrew for “well done” – was especially meaningful.

″(After singing) we all went to our seats to stick around; we had family and friends there as well,” she said. “We got the chance to celebrate and to watch a terrific game – the Red Sox won.”

Mike Gleason can be reached at 508-316-2809 or mgleason@wickedlocal.com. For news throughout the day, follow him on Twitter @MGleason_MDN.