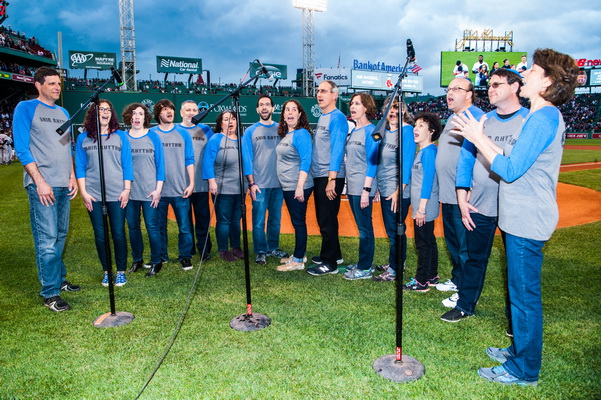 The June 5 game between the Red Sox and Detroit Tigers was designated as Jewish Heritage Night, an annual event at Fenway Park. Prominent leaders within the Boston Jewish community were honored on the field before the game. The Mensch on a Bench Mascot was on the field with Wally the Green Monster, mingling with fans during the pregame ceremonies.  Fans who purchased a ticket through the Jewish Heritage link also received a limited-edition Red Sox edition Mensch On A Bench bobblehead. First pitches were thrown out by the CEO and creator of Mensch on a Bench, Neal Hoffman, a Marblehead native, along with celebrity investor Robert Herjavec of the TV show Shark Tank. Boston Pops conductor Keith Lockhart also threw out a pregame pitch.

For hundreds of spectators from the South Shore, a highlight was hearing their local Jewish a capella group, Shir Rhythm, sing a lush rendition of the Star Spangled Banner.  Group member Paul Davidson said that “for most of us who have grown up as devoted Red Sox fans, this was a dream come true.” Rabbi Ron Fish of Temple Israel in Sharon was present as Sharon’s  “leader of the pack” and took part in Red Sox pre-game festivities in the Leader of the Pack Ceremony.

Shir Rhythm performs a cappella arrangements of songs in musical styles that include Jewish liturgical and folk music, Israeli pop songs and Classic Rock. A multi-generational, diverse group of singers that performs for audiences of all ages, Shir Rhythm members all have one thing in common: they love to sing, harmonize, and have fun! “We are honored to join the Red Sox for Jewish Heritage Night and proud to represent the Jewish community and America to sing the National Anthem this evening,” said business manager Lisa Einstein.